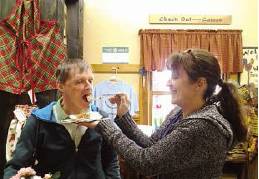 Longtime vendor Mike Hutton was honoured with a retirement ceremony at the Woodstock Farm and Craft Market on May 15.     Mike, and his wife, Essie, started planting an apple orchard on their farm property near Knowelsville while still teaching school. On retirement from teaching Mike took up the vocation of full-time organic apple producer. He has been a vendor in the market for the past 15 years.

In addition to apples, Mike produced apple cider, which he froze in two-litre bottles and had for sale in the market over much of the year. He added a variety of canned food items to his stall, including apple butter, pear butter, and honey. Mike added Jolly Farmer’s organic chicken and Speerville Mill organic whole grain products to his year-round offerings, both of which have become best sellers in the market.

Mike has been a strong advocate for organic agriculture and has been an active participant in the development and operation of ACORN – Atlantic Canadian Organic Regional Network. He has also taken a strong interest in the development and operation of the Woodstock Farm and Craft Market. He served on the board of directors for many years and provided important     leadership as president of the board during the time the market was redeveloped from a one-day to a six-day-a-week operation.

He served on the building committee and, along with Jerry Ingraham, was responsible for a major insulation upgrade and the installation of a new roof on the market building. Mike will be missed, but we are glad to report the farm has been sold to a family dedicated to carrying on the operation he and Essie have developed. The new owners will continue the business with the same stall in the market.

Mike and Essie are moving to St. Andrews. They have always wanted live near the sea and a good golf course. This move puts both close at hand. We wish them well in what we are sure will be an active retirement.