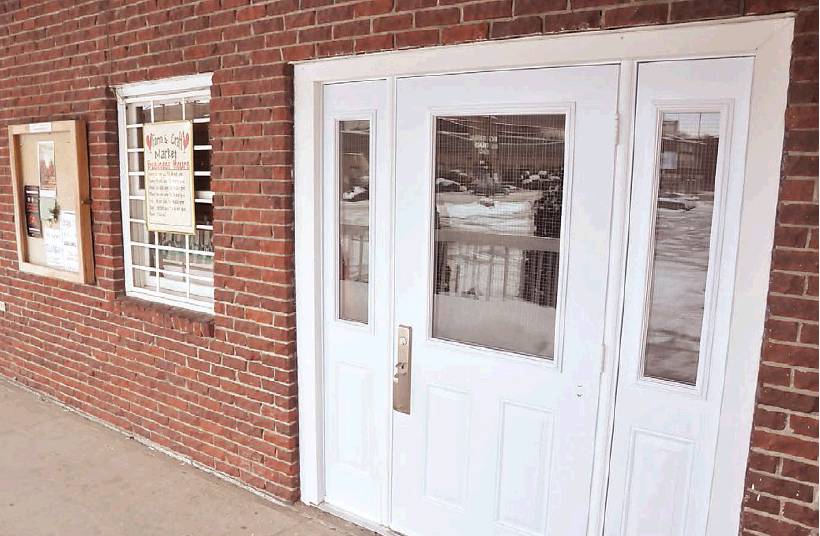 The Woodstock Farm and Craft Market is starting the New Year with a significant facelift. A whole new entrance and front door was installed on Monday and Tuesday of Christmas Week. Thanks to a grant from the Downtown Business Improvement Association, and to the fund raising contributions of Market customers, we took the plunge and made this investment.

After 25 years of heavy use, the original double doors at the Market’s front entrance were not only physically the worse for wear, but were looking pretty “down at the heels” as well.

Most folks probably didn’t notice as they came and went on their shopping errands, but the bottom edge of the steel doors were showing signs of rusting out just like the rocker panels on an old pickup truck. They had seen a lot of slushy, salt-laden snow tracked across the threshold over many winters. And the steel security screens that had been installed years ago over the windows always did look pretty grim.

But it was also the energy efficiency factor that was key to the Board of Director’s decision on the front entrance. The tightness of the closure seal around the doors was not perfect even when new, and years of use had made it even more drafty despite efforts to retrofit its air-leaking framework.

The new entrance is sealed with the best high-tech materials, and the door is tight as a drum when closed. The new hydraulic closure pulls the new door shut with a most solid and satisfying “THUNK.” A few years ago, the Market made a big investment for upgrading the insulation in the attic, which has really paid off in lowering heating costs. The new front entrance is another definite energy efficiency improvement.

The new entrance really does give the Market building a facelift. It has a handsome paneled door with a large security glass window. As you approach the door you can now see directly into the Market’s pleasing interior. Sidelight windows flank the doorway, giving the central entrance a balanced and attractive appearance. From the inside, the Market doorway in now noticeably brighter as more light comes through the entrance windows. It’s one of those small architectural improvements that makes a big difference in the feel of the Market building.

And hats off to contractors, Don MacDougal and Glen Taylor. They advised the Market on this project and completed the work in less than two days on the busiest shopping week of the year. Thanks too, to all those who put a donation in the fund raising box on the front counter. The box is still there for further donations on the door project. Over the years, capital improvements have been regularly helped out by the generous contributions of customers. The Woodstock Farm and Craft Market is a non-profit cooperative serving the vendors who rent stall space.

Thanks to all for your faithful patronage of the Farm and Craft Market and best wishes from the Directors and vendors for a safe and prosperous New Year.